Finn Wolfhard, known for his role as Mike in Stranger Things, joins forces with Guillermo del Toro for the animated film adaptation of Pinocchio. In a recent interview with WIRED magazine, the two participate in a Q&A session using autocomplete search suggestions. When del Toro asks if Wolfhard is a fan of anime, the actor admits to loving and respecting the genre, but adds that his brother is an even bigger fan. Check out the full video to see more of the playful exchange between Wolfhard and del Toro.

In a recent interview with WIRED magazine, Finn Wolfhard, known for his role in Stranger Things, and Guillermo del Toro, renowned film director, discuss their love for anime. Wolfhard admits to being a fan of Death Note and mentions he still needs to watch Chainsaw Man, which he heard is “unbelievable.” Meanwhile, del Toro confesses he hasn’t watched the series yet, but the two may have a chance to catch up soon as it is currently streaming on Crunchyroll. In the same interview, del Toro also reveals that he and other directors (whose identities he keeps secret) enjoy painting model kits together on Sundays. Tune in to the full video to see more of the playful exchange between Wolfhard and del Toro.

Advertisements
Man is a Japanese manga series written and illustrated by Tatsuki Fujimoto. It was serialized in Shueisha’s Weekly Shōnen Jump magazine from December 2018 to December 2020, and has been collected in nine tankōbon volumes. The series follows Denji, a young man who is struggling to make ends meet and pay off his father’s debt to a group of loan sharks. He is given the power to transform into a demon-human hybrid with a chainsaw for a head, which he uses to fight other demons and protect humanity.

The manga has been well received by readers and critics for its unique premise, fast-paced action, and character development. 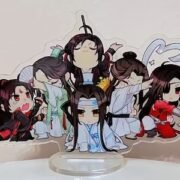