Arjun -The Warrior Prince is based on the ancient sacred epic Mahabharata and was released way back in May 2012.  Late Arnab Chaudhuri, who studied animation from NID Ahmedabad, had directed the movie . Although post production was over in 2010, it hit theaters as a summer release only in 2012. So, why are we talking about a movie released ten years ago ? This movie was long listed for the Academy Award ( popularly known as the one which snubbed Leonard DiCaprio way too long) for best animation feature for 2012.

A coming of age story, which retells Arjun’s path to becoming a valiant and righteous prince from a very personal perspective. It begins when Arjun is a young boy of royal lineage living his life as a dutiful student in the kingdom’s official gurukul. His guru or sensei is eminent Guru Dronacharya , who quickly sees Arjun’s potential to be far exceeding any of the other students. It is not hard to miss who is the teacher’s pet. Arjun has great reverence for his guru, who has a lot of influence over his character building. As Arjun’s time at gurukul comes to an end, Dronacharya gives him one final lesson after a good old sensei-disciple duel on his last day. He is very proud of his student and acknowledges that Arjun is a highly skilled fighter. However, he advises  Arjun that he needs to go through a lot of personal growth to become a true warrior at heart. Like any inexperienced young man , Arjun has no clue what it means at that point in time. Thus, we follow Arjun in his struggles and often dangerous journey from a privileged boy to invincible fighter who leads troops into a battlefield.

Indian movies are known to evoke sentimentalism in a certain way, and this animation movie shares that distinct quality of being able to pull your heartstrings.  It is pretty gritty if one considers Disney standards. For an average Indian viewer this movie will actually be considered as a remake of sorts, and proves why remakes can actually be a good thing. I went in carrying nostalgia of a sunday ritual from my childhood and thoroughly enjoyed the fresh new perspective of this movie. The movie’s script deviates from a few sub-plot elements of the original story. It benefits from it as the storyline now becomes digestible for younger audiences. The dialogues closely manage to match linguistic style to give you the feel of that age without sounding arcane. Voice acting sounds intentional, which deserves special mention because it succinctly draws out and adds layers to the characters. Being  quite a feat in itself, it adds to the entertainment value just like dubbed english action movies on UTV Action channel (IYKYK).

The original characters have slight variations in portrayal without missing out their core identity. What stands out is the manner in which they are written and are designed to carry the story forward. Arjun, as a young prince in the story is very relatable as his struggles are not one dimensional, rather extends to large spiritual questions around morals and values. It is the antithesis to any hero characterized by a false machismo, which is rampant to this day. At a few fleeting moments  one can’t help but feel excited about  many supporting characters like Dhritashastra, Draupadi, Dronacharya. They are multi-faceted larger than life characters who make compelling cases for a movie franchise.

RELATED: List of All Anime Characters of Indian Origin/Inspired by Indian Culture

Late Arnab Chauhduri is still considered as a pioneer because this movie was a huge step forward for the animation productions in India. It does so on multiple levels, most importantly breaking the stereotype that animation is meant for kids only. Secondly, staggeringly high production value from every other attempt at animation back in those days. The result is, there are key moments from the plot that comes alive through visually exquisite animation. The body language portrayed is naturally convincing for every frame even with perceivable slight kinks.  Another piece of the puzzle is realism and astounding background animation.  Arjun’s story required a scintillating imagery of  architecture and landscape of that bygone era which sets the atmosphere for a richer viewing experience. It would not be fair to compare this movie with standards to animation you see in any disney production or japanese animation production. Disney gained ownership of this movie when it acquired running ownership of UTV. It never tries to close that gap but also it never lets it stop from bringing in fluid visuals to the table and fantastic storytelling. Arjun, The Warrior Prince, remains as a huge milestone for animation in India, taking it for a quantum leap. At this point, I am reminded of excerpt from Pixar’s animated movie Ratatouille ( ra·tuh·too·ee). This movie can be summarized by this “ …but the bitter truth we critics must face is that  in the grand scheme of things the average piece of junk is probably more meaningful than our criticism designating itself… “ Anton Ego, Ratatouille. 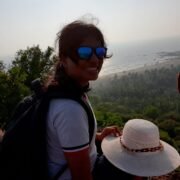 Bijaylaxmi Majhi
I will steal your waifu
Previous

The Detective Is Already Dead TV Anime Gets 2nd Season

Cosplay Carnival in Kolkata on December 25